A Netflix promotional posted for the show

The second seasonof Derry Girls premiered March 5, 2019 and ended April 9, 2019. It was broadcast on Channel 4 in the UK and later released internationally by Netflix.

On March 5, 2019, the second season of Derry Girls, consisting of six episodes, premiered on Channel 4.

The second season of Derry Girls follows Erin Quinn, her cousin Orla McCool, their friends Clare, Michelle and Michelle’s English cousin James Maguire. This rag-tag group of friends runs into trouble more often than not for trying to implement half-baked plans which they hope would help their lives get a little less torturous Their cries of fair treatment and rights fall on deaf ears of their Catholic and unsentimental parents, who are pretty set in their ways. 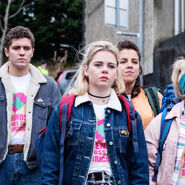 Add a photo to this gallery
Retrieved from "https://derry.fandom.com/wiki/Season_2?oldid=587"
Community content is available under CC-BY-SA unless otherwise noted.