Derry Girls is a Northern Irish sitcom that aired in the United Kingdom on Channel 4 and is now streaming on Netflix. The show was created and written by Lisa McGee.

Erin lives with her father, Gerry, and mother, Mary, her baby sister, Anna, Mary's younger sister, Sarah, Sarah's daughter, Orla, and her maternal grandfather, Joe. James is Michelle's cousin; his mother Cathy left Derry for England to have an abortion but gave birth to him and raised him in London. She sends him back to Derry to live with Michelle and her mother Deirdre when she is going through a divorce.

Derry Girls has received critical acclaim. On Rotten Tomatoes, the first season held an approval rating of 100% based on reviews from 21 critics. The website's critical consensus states that it is "A perfectly curated cast and raw writing drive Derry Girls's dark humor as creator Lisa McGee makes frenetic light of teen life in 1990s Northern Ireland".

Derry Girls was the most watched series in Northern Ireland since modern records began in 2002, with an average audience of 519,000 viewers and a 64.2% share of the audience.

The series was picked up by Netflix internationally, with Season 1 being released on 21 December 2018. Season 2 was released on 2 August 2019. 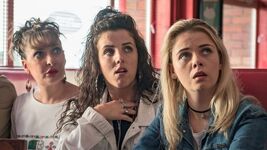 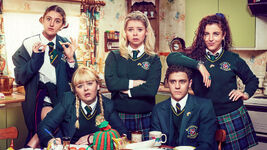 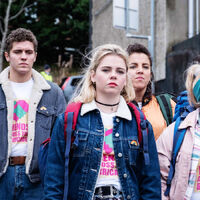 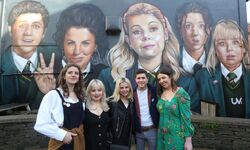 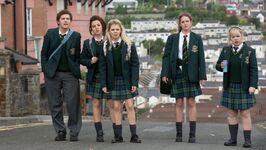 Add a photo to this gallery
Retrieved from "https://derry.fandom.com/wiki/Derry_Girls?oldid=680"
Community content is available under CC-BY-SA unless otherwise noted.